Quick calculation of the ξ and Ω matrices for Graph-SLAM

The following is a quick way to derive the Ω and ξ matrices from the graph that describes the motion and measurement constraints or, alternatively, to use the graph to check if the matrices are correct.

I took Udacity’s CS-373 class – Programming a Robotic Car – in March 2012. The class was taught by Sebastian Thrun, one of the most successful roboticists in many years, whose autonomous cars placed 1st and 2nd in the DARPA’s Grand Challenge and Urban Challenge, respectively.

The students of this course had access to a very active forum. I wrote a post about graph SLAM that many people liked so am reproducing here in case that new CS-373 Udacity students also find it useful.

SLAM stands for Simultaneous Localization and Mapping. It’s a technique that allows a robot to use repeated observations of landmarks to locate itself in a map of the environment built as it explores the surroundings.

In Graph-SLAM, the version of SLAM taught in CS-373, the robot motions and measurements are written as a set of linear equations

The matrices \(\Omega\) and \(\xi\) encode three type of constraints:

The problem is that there is an error associated with the motion and thus, we really do not know where the robot ended up at. Our best guess, though, is that the position \(x_1\) is at about

We can build a chain of relative motions of this kind, each related to the next one by

The observation of the landmarks from different locations \(x_i\) leads to similar constraints. A landmark \(L_j\) observed from position \(x_i\) at a distance \(k\) is described as

in which, again, we have that the relationship is only an approximation because of the uncertainty in both the location of the robot and the measurement.

Finally, depending on our confidence on a particular constraint we can add a weight to an equation, leading to a solution in which the error for that particular equation is reduced more than the others, e.g.,

We assign a large weigh to an equation (i.e., \(W > 1\)) when we believe that that particular equation has a small error (low variance) and should count more towards finding the solution of the system. Likewise, an equation associated with a large error (high variance) should be assigned a low weight (\( 0 < W < 1\)).

In an ideal world, the robot would move the desired distances accurately, and its measurements to the landmark \(L\) would be always correct. Instead, the actuators and sensors will introduce errors that accumulate as uncertainty in the position of the robot. The following graph describes the movements of the robot that we ordered and its measurements of the distance to the landmark: 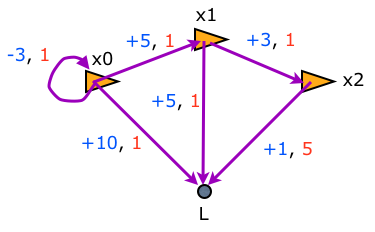 The ordered and measured distances are in blue; the weights of the equations are in red.

The constrains shown on the graph are:

Let’s dissect the scenario. The robot moves twice, taking a measurement from each location:

To build the \(\Omega\) matrix, we could start by finding its diagonal. Each element of the diagonal is the sum of the weights of the incoming and outgoing edges to the particular node:

Then we can find the off-diagonal elements: for each edge i, j is the negative of the weight between node i and node j:

For every other constraint, either relative pose or landmark, the sum should be 0. In the example, when adding the elements of the row of \(x_2\) in \(\Omega\) we get

These results are a consequence of assigning a large weight to the last measurement; we assigned it a weight of w = 5, which sets the variance of the measurement to \(1/w = 0.2\), stating that the measurement was very good when, in reality, it was a very bad one.

Now everything fits: the bad measurement contributes less toward the solution than the good measurements so the estimates reflect what actually happened: the robot moved as commanded, with smaller errors than those estimated before, and now all the observations are consistent.

We can take the case to the extreme and assign to the last measurement a weight of 0.0001, indicating the measurement was lousy and its equation should be given almost no value when solving the system; then we would have gotten:

i.e., the expected result for an essentially error-free scenario.

The following code runs the three scenarios described above:

and yields the expected results: