comments: suggestions to memorize some of these kanjis. 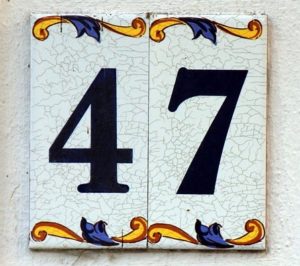 We count with on-yomis: いち, に, さん, し, …. Unfortunately, the on-yomi of 4, し, means ‘dead’ in Cantonese, so it is considered an unlucky number, which is why Chinese families dislike buying houses whose number includes a 4 [WP]. Thus, the Japanese modified the kun-yomi よつ into よん, to have an alternate way to count 4 without the unlucky implication: いち, に, さん, よん, ….

Likewise, the on-yomis of 7 and 9 – しち and く, sound like ‘near-certain death’ and ‘pain and suffering’ in Japanese, so they were given the alternate names なな (a modification of ななつ) and きゅう (a modification of く that sounds as ‘relief’) [WP].

What version of the number to use is sometimes a choice but sometimes it isn’t, e.g., 7:00 is always しちじ, while 7000 is always ななせん.

comments: suggestions to memorize some of these kanjis. 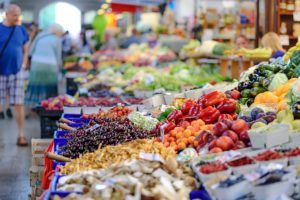 The suffix や (ya) indicates a store of some kind, or a person that works at that store. For example, さかなや is either a store that sells fish, or the person that works at that store. The same goes for パンや (bread store, a.k.a. bakery), 本や (book store), にくや (meat shop), 花や (flower shop), and many others. Well… with this background we would be at a loss with a store called 八百や (the 800-store) that is pronounced, of all things, やおや. What does it sell?

It turns out that in English we use the word ‘zillion’ to describe a large number, while Japanese used to use the number ‘800’, so the 800-store is a store that sells a large number of ‘things’, and it turns out to be… a produce shop; yeap… a store that sells vegetables. The pronunciation appears to be a combination of the abbreviation of やさい (vegetable), and おや (respectable shop), i.e., やさいおや, reduced to やおや. What throws us off is that the pronunciation and the writing have nothing to do with each other.

These are basic words that use only kanken-10 kanjis:

1st of the month
1st-year student

two persons
2nd of the month