English
Yes (I agree)
No (I disagree)
a little, a few

Eng: I understand a little Japanese.

Lit: Me? Japanese! I understand it a little.

This sentence illustrates the main differences between formal and casual speech:

formal vs. casual
wakarimasu/wakaru
watashi vs. boku
sukoshi vs. chotto
wa/ga vs. nothing

The following comments explain some of the grammar in more detail.

In Japanese, we can say ‘I’ and ‘you’ in many ways. ‘watashi’ is fairly safe to use for ‘I’. However, the respectful way to address someone else is not using ‘you’, directly, but addressing him or her indirectly, using the person’s last name and an honorific, e.g., ‘Tanaka san’; even ‘anata’, which is fairly formal, can be insulting in some cases. ‘anata’ is an example of how indirect the Japanese try to be; ‘anata’ literally means ‘that person over there’ even though we are using it to address the person right in front of us.

We can say ‘I’ and ‘you’ in many other ways; we comment about some of these in the clips.

Japanese ‘particles’ play the role of prepositions and conjunctions in English; they are words like ‘to’, ‘for’, ‘at’, ‘with’, ‘but’, or ‘in’. In Japanese, these particles usually follow the noun, e.g.,

Most particles have more than one function, but we will only discuss the function used in the lesson. Lesson 1 introduces the particles ‘ka’, ‘wa’, and ‘ga’.

English
English! Do you understand it?
You? Are you American?

English
Do you understand?
What about you?
Mr. Tanaka? 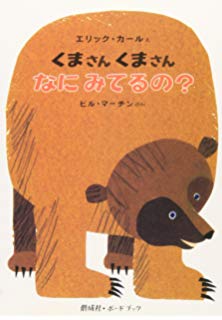 Sometimes the question mark ‘?’ is denoted with ‘no’ (の) instead of ‘ka’ (か), specially by women and children. For example, the formal title of the Japanese version of Eric Carle’s

i.e., the casual version drops the ‘wo’ particle; it uses ‘miteru’, an abbreviation of the casual form ‘mite iru’, instead of the formal ‘masu’ form ‘mite imasu’; and – what we actually are interested in – it uses ‘no’ instead of ‘ka’ to represent the question mark ‘?’.

It is also common, particularly in casual conversation, to replace the spoken question mark, either the ‘ka’ or the ‘no’, with a ‘ne?’ or a ‘na?’, which would mean ‘right?’, or to even remove it completely and make clear that it is a question with the intonation:

A long time ago, the particle ‘wa’ used to be pronounced ‘ha’ (は); later the pronunciation changed to ‘wa’ (わ), but the writing of the particle remained ‘は’. We will write this particle in romaji as it sounds, i.e., ‘wa’.

は is the ‘topic marker’; we use it to mark what comes before は as the topic of the conversation, and to emphasize what comes after は as the important part of the sentence, e.g.,

Above we have used ‘wa’ to mark ‘watashi’ as the topic of the sentence, and to say that what is important is that ‘watashi’ is American. The part that precedes は, i.e., the topic, is often known from the context and it is secondary to the point that we can often omit it:

The possibility of omitting the topic leads to different ways of saying the same thing:

The third and fourth of these constructions are common in casual speech. In the third one, we replace the particle は with a pause, and in the fourth one we start our sentence omitting the topic, and after we finish the sentence, we change our minds and decide to make the topic clear, so after a pause, we append it at the end, as a sort of afterthought.

‘wa’ is often translated as ‘Speaking of…’ or ‘As for…’, but we are going to translate it just as a question mark [Rubin], e.g.,

Translating は as ‘?’ feels natural and fits well even in cases where the sentence consists only of the topic:

‘ga’ (が) has multiple functions. In lesson 1, we use it as the ‘subject’ marker, i.e., we mark what comes before が as the subject of the sentence and emphasize it, i.e., it’s the important part of the sentence. In the same way we can translate the topic marker ‘wa’ (は) as ‘?’, we can translate the subject marker ‘ga’ (が) as ‘!’ [Rubin]. For example, we might use either of these translations:

We cannot use context to identify the ‘subject’ that が marks because it is unknown, so we cannot remove it. Actually, Tae Kim goes as far as calling ‘ga’ the ‘identifier particle’ instead of the ‘subject marker’.

To highlight the difference further, check out the following questions. Google translate translates them both as ‘Does Mr. Mori understand/know English?’, which is correct, but the nuance is lost:

English? Does Mr. Mori understand it?

Mr. Mori? Does he understand English?

Another example: from behind, we cover the eyes of a friend that we are trying to surprise. How do we reveal ourselves saying ‘Its me!’? Do we use ‘watashi wa’, or ‘watashi ga’? Well… we would say the same thing we would say in English: ‘watashi wa’ translates to ‘(Is it) me?’ (a stupid thing to ask to someone we are trying to surprise), while ‘watashi ga’ translates to ‘(It is) me!’ (surprise!), which is the correct response. So the important lesson here is that we don’t go around surprising people and revealing ourselves with ‘watashi wa’ because that does not make any sense.

Usually, we pronounce ‘desu’ as ‘des’, i.e., the ‘u’ is very faint, or omitted completely.

Japanese verbs don’t have singulars and plurals, so ‘desu’ is any of the conjugations of the verb ‘to be’:

‘desu’ is used in formal speech; the casual version of ‘desu’ is ‘da’:

Although ‘desu’ is formal, it is actually the abbreviation of even more polite forms, all of which mean ‘to be’:

Some of these forms are archaic, so they often appear in samurai movies. Service personnel still use the last form to show extreme politeness to their patrons. Hence, it would not be unusual that a receptionist at a hotel or restaurant would introduce their place in the phone using it, e.g., instead of saying ‘toukyou hoteru desu’, they would say ‘touyou hoteru de goza-imasu’.

The ‘masu’ form is a formal verb form. Usually, we pronounce ‘masu’ as ‘mas’, not ‘masu’. In the ‘masu’ form, we attach the particle ‘-masu’ – or a variation of it – to the end of the verb; we attach ‘-masu’ for the positive conjugation, and ‘-masen’ for the negative one:

Japanese verbs only make distinctions between past and non-past actions. For example, the positive and negative non-past conjugations of the verb ‘to eat’ are:

That is, ‘tabe-masu’ means ‘I eat’, ‘I am going to eat’, and ‘I will eat’; the context indicates what we actually mean.

The ‘masu’ form is always formal. In the following examples, we modify the verbs ‘wakaru’ (to understand) and ‘sumu’ (to feel at ease) to use the ‘masu’ form.

Both る (ru) and む (mu) are syllables that end in ‘u’ so we are not breaking the rule that all dictionary verbs end in ‘-u’.

The negative ‘masu’ form of ‘sumu’ (to feel at ease) is ‘sumi-masen’, which means ‘to not feel at ease’; we use it as a light formal apology, similar to ‘excuse me’; ‘sumi-masen’ is usually pronounced ‘sui-masen’, without the ‘m’. To make the apology more formal, we follow it with ‘desu’. The negative dictionary form of ‘sumu’ is ‘suma-nai’, which is the corresponding light casual apology; to make it more casual we shorten it to ‘suman’. If we want to apologize for something that is completely in the past, as opposed to some ongoing process, we can conjugate the verb in the past.

In the direction of being even more casual than ‘suman’, the adjective ‘warui’ (bad) is also used as a very casual apology; it means ‘my bad’.

More formal than ‘sumimasen’, and used to apologize to a superior, we have